THE DBDRV – A NEW WAY TO SOLVE BUILDING DISPUTES?

In April 2017, the Domestic Building Dispute Resolution Victoria (DBDRV) was established by the Victorian government.

A business unit of the Department of Justice and Regulation, the DBDRV was established as an independent government agency to assist with the resolution of domestic building disputes.

The service is free to building owners – such as an Owners Corporation – and builders and acts as a tailored dispute resolution service.

PLEASE NOTE: Since launching, the DBDRV has been inundated with numerous claims and as a result warns applicants that lengthy delays should be expected in the initial assessment of your application.

Most disputes between building owners and builders will need to pass through the DBDRV before they can proceed to VCAT.

There are two exceptions to this rule which apply if:
While the body is relatively new, it has already become a key cog in the state’s dispute resolution process for domestic building disputes.

However, to access the service, the party bringing the dispute to the DBDRV must have made some efforts to resolve the issue directly with the other party.

So, what does this mean for Owners Corporations and lot owners within them?

The DBDRV is a free service, making it an attractive one for owners and Owners Corporations alike, but its use still requires careful planning and consideration.

Below, Strata Plan will explain the basics of the DBDRV and how you and your Owners Corporation should consider using the service to your benefit.

WHAT DISPUTES CAN THE DBDRV CONSIDER?

The DBDRV can only be used to consider disputes surrounding domestic building work. This can include, but is not limited to:
The DBDRV does not charge a fee for its service. The following may be eligible to use the DBDRV’s dispute resolution service:
Both private lot owners and Owners Corporations can raise issues.

For instance, if you are concerned about or suspect there is defective or incomplete building work inside your private lot, then you could potentially use this service as a private owner.

I BELIEVE MY BUILDING HAS DEFECTS, CAN I GO STRAIGHT TO THE DBDRV?

If you’ve seen a leak in the basement or you think there might be an issue with your common areas, hold your horses, it’s not time to run to the DBDRV yet.

Of course, before you do anything, it would be wise to investigate whether or not the issues you are facing are in fact building defects.

Often, issues appear due to a lack of maintenance, user error or simple wear and tear as a building’s various assets are used and placed under increasing strain.

Before any issues can be taken to the DBDRV, reasonable steps must have been taken to resolve the conflict directly with the other party.

That means you and/or your Owners Corporation will need to correspond with the builder, bringing your issues to their attention.

The DBDRV lists the following as constituting reasonable steps:
The website also has a handy guide to resolving disputes with the other party which notably includes, amongst other things, the need to have a calm discussion rather than heated arguments in which demands are made of the other party.

For the DBDRV’s three-step guide to resolving your dispute, go HERE.

If you and/or your Owners Corporation believe you have made reasonable attempts to resolve the dispute and that your dispute relates to defective or incomplete building work, delays to building work or another issue matter arising from a domestic building contract, then you can lodge your application online.

Please note that if your concerns relate to common property, then an application should be made by your Owners Corporation.

It’s important that you speak to your Owners Corporation manager or committee to discuss how this issue should be raised and find out if your fellow owners are happy to go down the dispute resolution path.

If your dispute relates to private property, you may lodge your own application in your own name.

There is a wealth of information you and/or your Owners Corporation will need to fill out the DBDRV’s application form.

First of all, you will need to prove your dispute is eligible for the service via a quick questionnaire, as seen below. 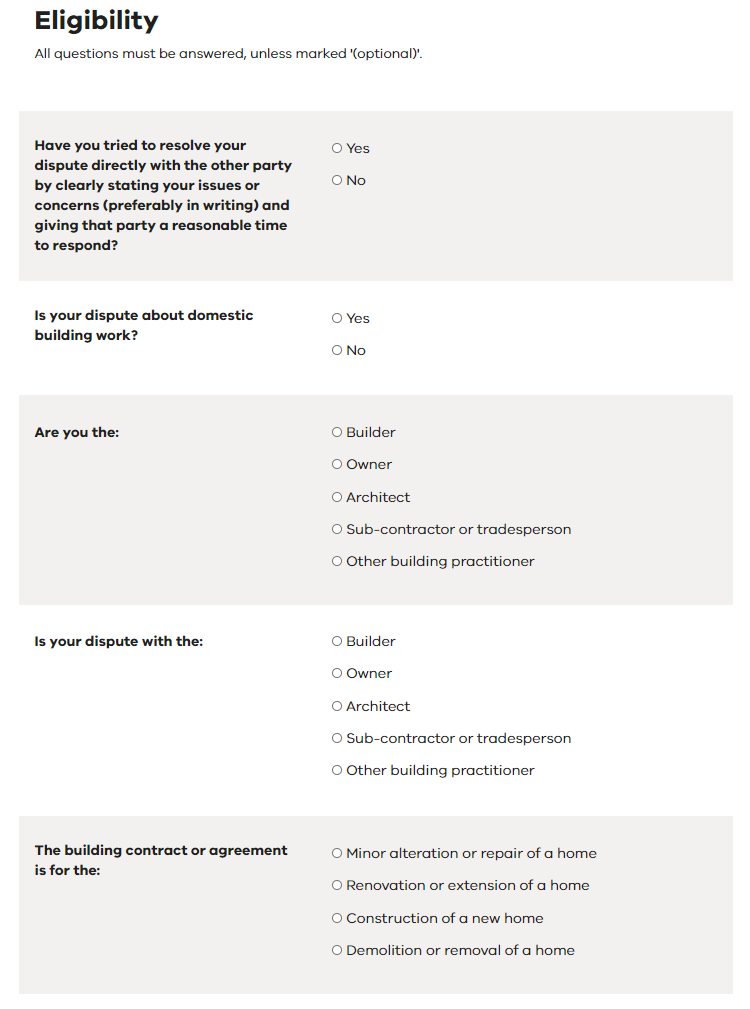 Your answers to these questions will determine whether you are able to move to the next step and fill out the application form.

If you are eligible, you will need to fill out a five-stage form. The steps are shown below.

The chunk of your application will be filled out in the first step, “Dispute Details”. 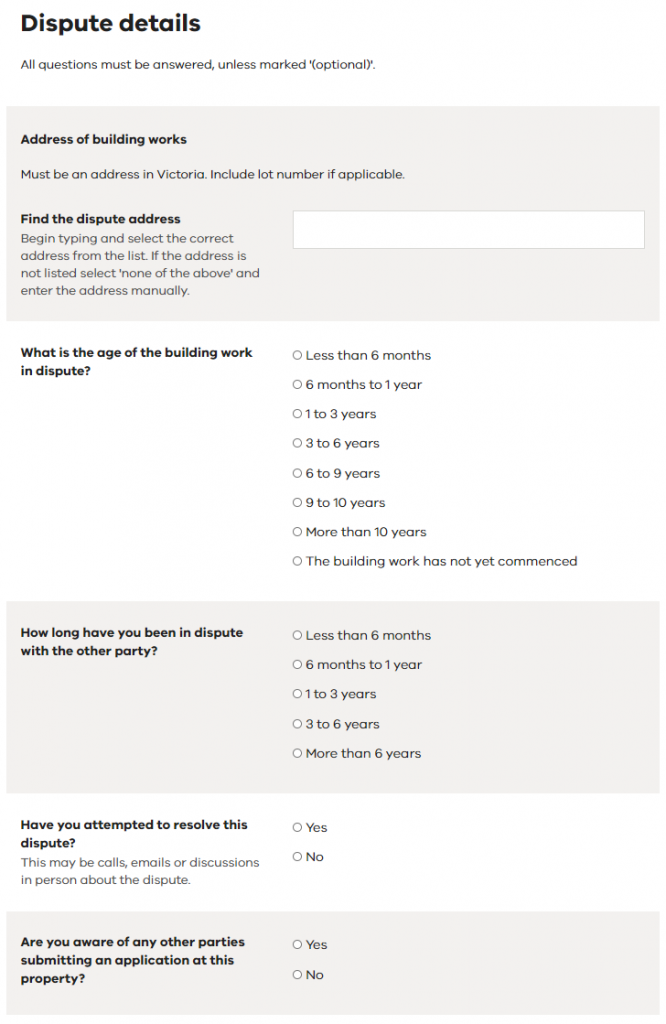 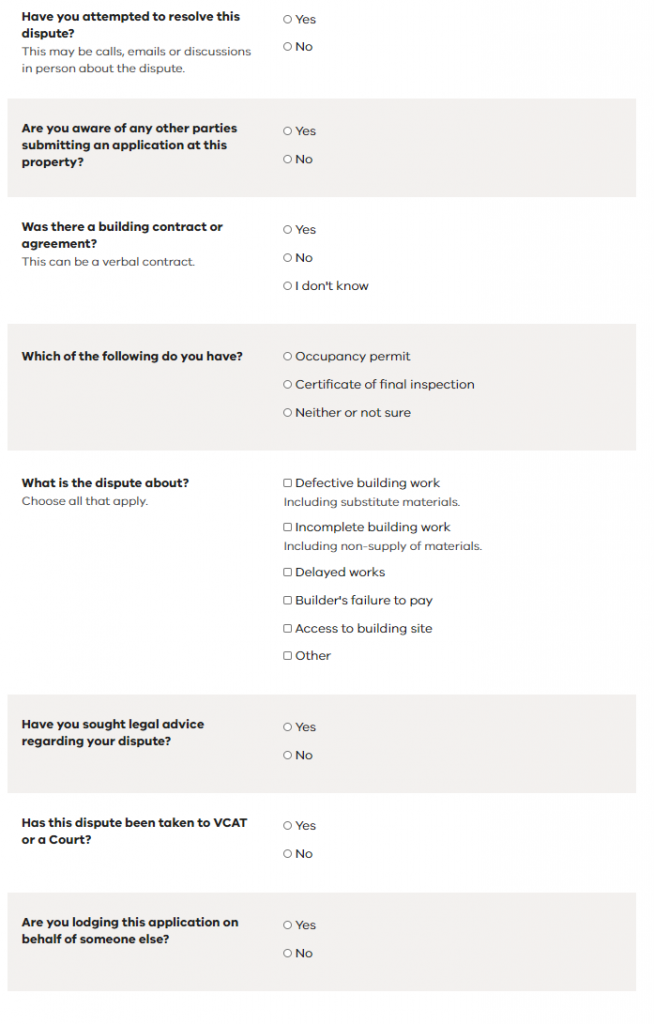 You will need your building address, details of your last correspondence with the other party, a copy of your occupancy permit or a certificate of final inspection, a copy of your contract, as well as being able to clearly identify what the dispute is about.

The full form can be seen below (PLEASE NOTE: This form will expand and ask for further details depending on your answers). 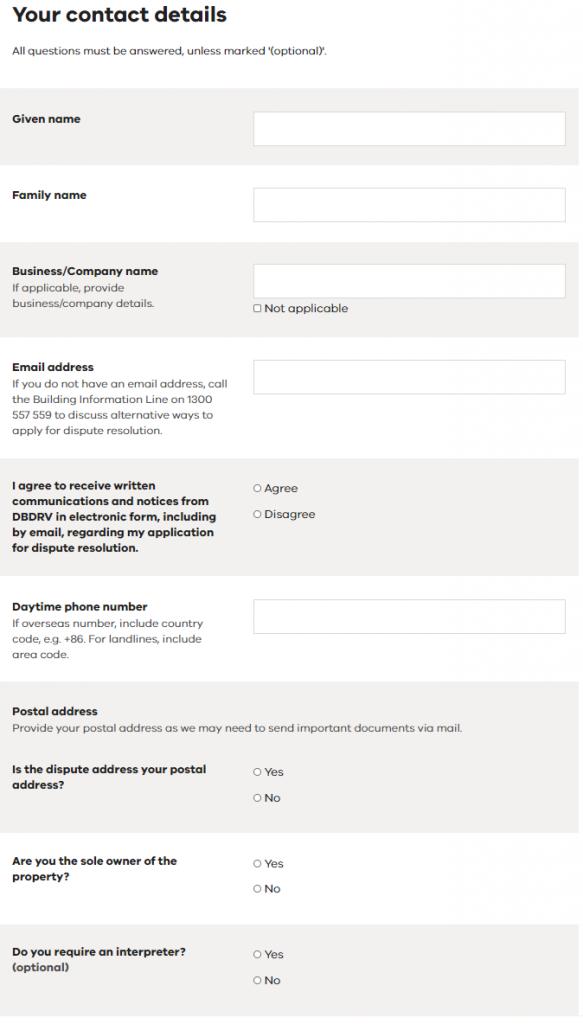 Your application will be subject to a Jurisdiction Check, in which a DBDRV Dispute Resolution Officer will evaluate whether or not their service covers your dispute. They may contact you for further information if they have doubts.

If your dispute is not covered by their service, then you will receive a recommendation on where else you can take the issue.

If your application is accepted it will progress to the next stage.

Congratulations! If you’ve made it this far, your application is up for an Initial Assessment, to be performed by a DBDRV Dispute Resolution Officer.

Once your application has been assigned to an Officer, they will assess your dispute against Section 45C(3) of the Domestic Building Contracts Act 1995.

Your Officer will also consider the likelihood that conciliation can help resolve the dispute.

After this, your application will be accepted for conciliation or rejected.

If the application is rejected, you will be contacted by your Officer who will explain why it was rejected and your other options.

If accepted, the dispute will move towards conciliation.

As part of this process and in preparation for your conciliation conference, you may be asked to provide the following:
A building assessment will also be carried out as part of this process with the aim of doing final investigations as to whether the works in question are defective or incomplete. You will be advised of the time and place for your conciliation conference, which all affected parties must attend. Your conciliator will:
If a party does not participate in conciliation, the DBDRV may do any of the following:

At the end of this process – which could take anywhere between six and 12 months to complete – you may achieve the following outcomes.

If both parties come to an agreement, this will be documented in a formal record of the agreement.

This will include the agreed actions of all parties, along with the dates these actions should be completed.

If an agreement can’t be made, the DBDRV’s Chief Dispute Resolution Officer may issue a binding Dispute resolution against one or both parties.

If the dispute cannot be resolved and no binding order can be issued, the DBDRV may issue a certificate of conciliation (dispute not resolved). The parties will then be entitled to make an application to VCAT, if they wish.

This free process is a great avenue for owners and/or their Owners Corporations to seek conciliation with their builders.

The advantage of the DBDRV is that it is a free service and has the power to hand down binding options, however, the length of time involved can make it a frustrating process with no guarantee of a favourable result.

As always, the most efficient route to solve any outstanding building issues is always to properly investigate the issues with your building and seek a resolution directly with the other party.

We hope this article has been insightful. If you are a Strata Plan customer and you have any further queries about the process, submit an enquiry or give us a call.

Not a Strata Plan customer? That’s ok! If you’re looking to change managers and have us assist in your building disputes, as well as manage your property, get in touch with us through our quote request form or give us a call!

MANAGING NUISANCE PETS IN YOUR OWNERS CORPROATION In September 2016, VCAT made a ruling which effectively made it impossible for an

This is an article repost. Posted in September 2018 Last week (September 7, 2018) the Victorian parliament passed new laws which hope

Update on the COVID Safe advice from the Victorian Government-Circuit Breaker restrictions from 11:59PM May 27th

The situation regarding COVID Safe Advice is constantly changing and Strata Plan will monitor it closely for updates. These updates

They take a team of committed and united lot owners to co-create solutions and forge a successful path to rectification.