Strata Plan was recently hand-picked by some of the industry’s largest and influential firms and to become part of an Australian panel to look at innovative solutions for the industry.

As one of nine companies from across Australia, the panel represented over 25% of all strata schemes across the country, approx. 78,000 buildings and 640,000 lots.

(A recent study conducted by the City Future Research Centre at the University of New South Wales reported that there are 316,227 strata buildings across and 2,587,397.)

Strata Plan was the only company exclusively based in Victoria invited to participate, which CEO Simon Chamaa described as an honour for the company, its people and customers.

“When we were invited we were told they wanted to get the most influential strata managers in Australia together and try to come up with a strategy around the existing model,” Mr Chamaa said.

“When we were asked, I kind of thought that it was humbling to be recognised as the only Victorian based Owners Corporation Manager from over 800 other firms in Victoria.

“When I asked them why they invited us, we were basically told that we were doing things and thinking in ways that others weren’t.

“They said the panel was looking for organisations which are innovative and that challenge the status quo to deliver unparalleled service to its customers and people.”

Mr Chamaa said Strata Plan’s service model is unlike any other that he is aware of in the industry.

“For many years, the industry has been plagued by complaints about the lack of service or skill of Owners Corporation management firms and even within the industry there can be a real challenge looking for qualified people,” he said.

Strata Plan recognised this from its earliest days and believed the primary issue related to the traditional and existing business model within management firms. 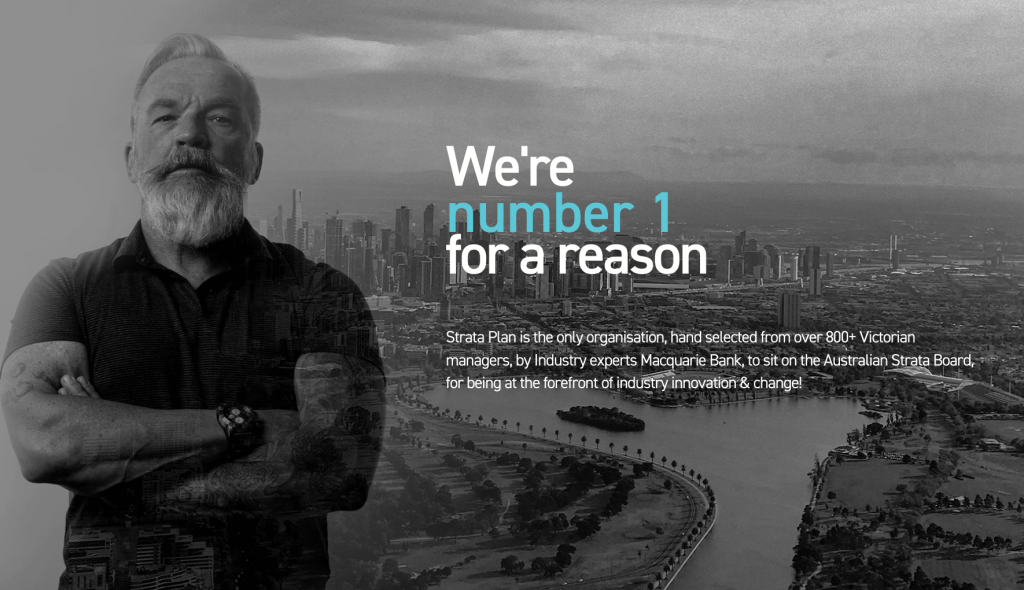 This model typically sees one manager work with an assistant, who would be working across several portfolios and anywhere up to 100 buildings.

“This sole person is assumed to be an expert in the vast set of skills and expertise required to run an Owners Corporation such as; finances and accounting, legal, asset and facility management, dispute resolution, insurance and public speaking.

“In my experience, I’ve never come across anyone person capable of having all these skills.”

Mr Chamaa said that he saw the potential for a different model from his earliest days in the industry when Strata Plan was formed over 10 years ago.
“We strive to be unique within our industry, constantly learning and listening to our people and customers. We focus on being courageous, creative and inspiring amazing life-spaces,” he said.

“We’re not afraid to turn things on its head and challenge the status quo – our people come first and then our customers.

“Some would say this is taboo, but we believe this culture is paramount to our customer’s needs. A team of people who are appreciated, nurtured and cared about will deliver unparalleled service to a customer, compared to a team which is overworked, left to swim in the deep end and unappreciated.”

With that in mind, Strata Plan is set up to ensure that managers are supported by true experts in their fields.

“The idea is that we should have experts in each skill set, instead of jacks of all trades. Build teams of experts who support our Strata Managers, enabling them to focus on the deliverables, relationships and guidance.”

The panel met for the first time in Sydney earlier this month, coming together to discuss a number of challenges facing the industry, particularly around increasing the profile of the industry as an attractive one for potential workers.

Mr Chamaa believes that Strata Plan’s model opens up the industry to a much wider range of people and played a big role in the company’s invitation to contribute to the discussion.

“Effectively, as strata managers, we’re expected to be across seven or eight different roles or areas of expertise, so we’re trying to enable ourselves to be experts in every field instead of being a generalist in all of them.”

Mr Chamaa said simply being asked to join the panel was a great honour for Strata Plan and its people.

“Whilst we’re humbled by the recognition from our peers, we’re more proud of our people and the benefits we’re able to deliver to our customers.”

Friendships is the lock, and communication is the key

Today, one of our OC managers finished their very first AGM, and it went really well!  At Strata Plan, we